Over a month since my last post. Crazy, even I'm surprised that I could keep my strongly opinionated blogging voice quiet for that long...
A good friend of mine mentioned a blog of a guy we both know. I asked him what topics he discusses and he said that he just talks about things that happen to him...what? That caught me off guard for some reason. My friend pointed out that my blog deals with issues and this guy's just deals with what he sees and thinks about what his kids are doing, etc. I thought about that off and on over the next couple weeks. I realized that I am someone who comes across an issue then mulls it over until I can feel comfortable with it. There is only 2 issues that I have had to "put on the shelf." The rest I have an answer for, some stronger than others. I guess this is what makes me so opinionated. I think I've already worked it out and it makes me quick to give an answer if anyone ever asks or wants to know.

I guess I haven't felt strongly enough about any one "issue" lately to spend time working out its various nuances. With no meat to chew on I haven't been inspired enough to post about any one subject. Here are some things that I have been thinking about though:

1-My favorite post (because it was the most soul searching and educational one for me) was my post on "Supporting Your Leaders." In it I discussed the often heatedly debated subject of prophetic infallibility. The post doesn't perfectly detail out my thoughts on this subject, and I don't want to spend the long time here that it would require. There has been one problem for me though, I have wanted to find a scriptural example of a prophet making a mistake (to me leading the church astray and saying something incorrect, even doctrinally, are two different things).

As I did my personal study and thought about potential examples I couldn't think of any. Just the other day I think I finally found one. In 1 Nephi we read of how he breaks his bow. Except for Nephi, everyone in his family including the prophet of their people, Lehi, begin to complain. Lehi is so out of line that he was "truly chastened...[and was]...down into the depths of sorrow." Rather than being an infallible prophet and leading this people, the future church of the Americas, forward correctly he messes up. He murmurs to the point that the Liahona no longer works for him. Nephi could have pointed out that his father wasn't leading the people appropriately, started a movement and steered the ship back onto its truly correct course. He would have been right, right?

Instead of committing the proverbial ark steadying he came up with his correction of the problem (broken bow problem, not the repercussion problem of murmuring*) and humbly asked the leader of the people, "Whither shall I go to obtain food?" Not a perfect example, but two key points. A) He focused on the issue and B) he gave deference to the leader. I'll compare this with those who strongly felt like the priesthood should be given to all worthy males before the prophet had come to this decision. Note: I'm not saying that denying that before was necessarily the equivocation of the church leadership. If you felt strongly that this policy should be changed it would be better to reverently discuss reasons why with leadership and give deference to them on how it should be handled. I'm sure there are holes in this comparison that need to be worked out, but it was similar enough for me to have a greater appreciation for the section of scripture. 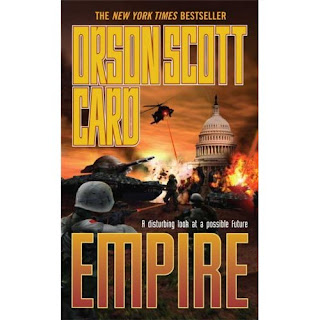 2-I just finished the book Empire, by Orson Scott Card. It's set in the modern day and is about a civil war that starts in America between the Liberal Left and the Conservative Right. I REALLY liked this book, not so much for it's story, but for it's point. You have to swallow a few big pills to accept the story. Nevertheless, I especially liked the last chapter where the author gives a postlogue about how the country is so polarized between the right and the left. Each side has a set of beliefs and if you espouse one you have to hold religiously to them all. He hates that and that is the main bone that I have to pick with politics today. I hate dealing with hard core Republicans and hard core Democrats. Why can't I be pro-environment yet anti-abortion, or pro-gun but anti-fully automatics, pro-evolution but pro-religion? If people ask me my political stance I say "Moral Conservative." I'm even semi-pro choice (FYI, just like the church I might add, but that statement is surprising to many people). Furthermore, why can't we discuss things we disagree about without hating each other?
Posted by Carson Calderwood at 9:42 PM 11 comments: