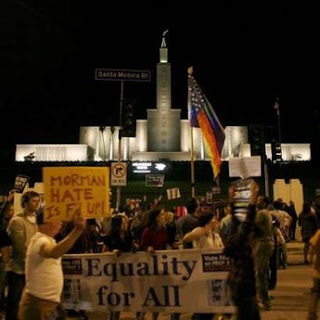 I'm short on time so this post has to be unfortunately truncated. I have purposely avoided posting about the prop-8 subject because there is so much negativity. Why do people on both sides have to be so negative? Those that are pro-8 are usually against it for christian rights, shouldn't they be more...uh...christian? Those against it are usually for equality and anti-hate crimes, etc.. Shouldn't they be...uh...less hateful.

To scroll through the hate, it starts around picture 30.
Posted by Carson Calderwood at 7:33 AM 6 comments:

I know, just typing that makes me cringe. If you know me well, you know that I am a documentation nazi because I can't stand people being caught up in sensationalism and stating or passing on statements without a sound base. With that in mind, consider the following...

I almost always listen to audio books on my drive home at night. Tonight I couldn't remember which book was next in my series so I decided to listen to talk radio and see how the polls were doing the last day before elections. Unfortunately Monday is my late night and the only major talk radio on during my drive home is Michael Savage. I absolutely hate that guy's antics and think he is a little disturbed mentally, seriously. Anyway, I thought I would check out what he was saying for a minute and I popped in right as a very intelligent Latino was talking about Obama being part of a 30+ year old Italian communist agenda plan. Normally, this would be where I would sigh and turn the station, but this guy had a grounded and experienced sound to him that intrigued me. He was talking about being part of inner circles that have been working on slowly using democracy to end democracy. Despite how crazy it sounds, take a minute and listen to my two recommended segments, then you can listen to the rest if you want and let me know what you think.

You can download all three segments by going here - http://www.910knew.com/cc-common/podcast/single_podcast.html?podcast=savage.xml

Download the first hour (Nov 3rd) as instructed and start listening at 20 minutes and 30 seconds. Like I said, ignore everything Savage says, he is mentally disturbed. At 26 minutes and 25 seconds the caller talks about his experience a little.

I only got to minute 9 on the second hour before having to go to bed, so I'll listen to the rest tomorrow.

Another thing that made me stop and consider this (because I also hate conspiracy theories) was a local talk radio guy interviewing a man that had word print proof that William Ayers had written part of Obama's book(s). The only reason why I listened to this was because I have read extensively on how word print analysis has been used on the Book of Mormon to evaluate its authorship. To see the analysis read here - http://www.cashill.com/natl_general/evidence_mounts.htm.
Posted by Carson Calderwood at 9:55 PM 7 comments:

Most of the email forwards I receive I delete pretty quickly because they are over sensationalized, but this one emphasized the final intent of my previous post.

"Make no mistake about it, brothers and sisters, in the months and years ahead, events are likely to require each member to decide whether or not he will follow the First Presidency. Members will find it more difficult to halt longer between two opinions. President Marion G. Romney said, many years ago, that he had 'never hesitated to follow the counsel of the Authorities of the Church even though it crossed my social, professional or
political life.'

"This is hard doctrine, but it is particularly vital doctrine in a society which is becoming more wicked. In short, brothers and sisters, not being ashamed of the gospel of Jesus Christ includes not being ashamed of the prophets of Jesus Christ. . . . Your discipleship may see the time when such religious convictions are discounted. . . . This new irreligious imperialism seeks to disallow certain opinions simply because those opinions grow out of religious convictions.

"Resistance to abortion will be seen as primitive. Concern over the institution of the family will be viewed as untrendy and unenlightened.... Before the ultimate victory of the forces of righteousness, some skirmishes
will be lost. Even in these, however, let us leave a record so that the choices are clear, letting others do as they will in the face of prophetic counsel. There will also be times, happily, when a minor defeat seems probable, but others will step forward, having been rallied to rightness by what we do. We will know the joy, on occasion, of having awakened a slumbering majority of the decent people of all races and creeds which was, till then, unconscious of itself. Jesus said that when the fig trees put forth their leaves, 'summer is nigh.' Thus warned that summer is upon us, let us not then complain of the heat."

And, as a doctor myself, I couldn't help feeling some resonation with this article. Although I can't forsee any similar circumstances for my profession, if I had to consider changing 21 years of school because of a new ruling similar to prop-8 failure, it would be a very hard pill to swallow.
Posted by Carson Calderwood at 10:45 AM 3 comments: